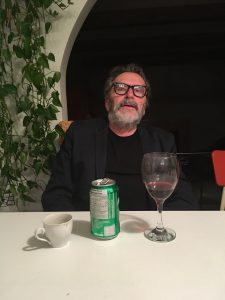 Corrado Paina (born in Milan in 1954) is an Italian poet.

Corrado Paina arrived in Toronto almost half his life ago. He has been writing about the fluidity of this anthropological landscape and for quite a while he has been prisoner of this idea. His writing talks about the change of borders in life, sex and soul. Now after 5 books of poetry in Canada, several in Italy and a novel and other publications in both countries it is time to move on.

Corrado Paina was born a painter but a father, who preferred the old Greek and the Latin than visual arts, forced him to go to the liceo classics instead of the school of art. Great! Because he was a lousy painter.

A natural despise for European status quo and a certain propensity to kinetic living brought him here.

He would have loved to live in Cuba but it didn’t work out. His favourite cities are: 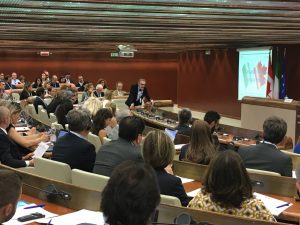 Paris uber alles. If he had some money he would buy an apartment in downtown Gerace which is over a cliff in front the Ionian sea and go for breakfast to Lisbon, lunch in Milan and to see a play in Paris, Berlin or New York or Rome or London.

Or in Nuevitas and go to Habana for a coffee and to buy paintings. One thing for sure, Corrado Paina loves theatre and movies.

His favorite state of mind and body is reached when:

Paina likes baroque music in the morning fading into classic music, contemporary music and then rock. Rock and jazz in the afternoon. Americana in the evening and some chansonniers.